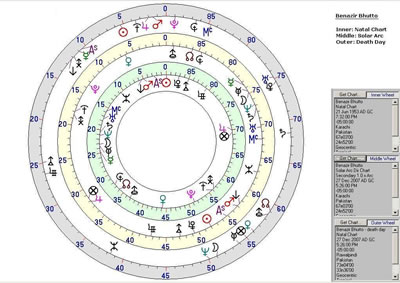 The Destiny of Benazir Bhutto

Benazir Bhutto, ex premier of Pakistan dismissed in 1996, was actually the charismatic leader of the PPP (Pakistan People Party). She came back to Pakistan after the self-imposed exile in Dubai in order to be part of the Pakistan elections next January 2008. She was killed during an electoral campaign tour in Rawalpindi on 27th December 2007 , approximately around 5:30 pm (according to the official death declaration by the hospital at: 6:16 p.m). Her death seemed to be a terrorist attack.

Pakistan’s prime minister Pervez Musharraf was more or less considered by the public opinion in the world to be the instigator of the attack. He defended himself by calling on Scotland Yard to come to investigate.

In despite the fact that Mrs. Bhutto gained the favour of England and USA, and in general of the Western Countries, the American historian Arthur Herman wrote in The Wall Street Journal of 14th June 2007, the following sentence about her “ She is one of the most incompetent leaders in the history of South-Asia”.

To tell the truth, her constellations for Premier don’t show one competent leadership (see below):

SU/KR = (SU=AR)/KR = MC/VU = MA = SU/PO = VE/ZE = VE/KR = ME/HA = (MO = AD) / HA : “She is a Premier motivated to impose her strong willpower. Her high spirit is only outward, she doesn’t express her thoughts and actually wishes war or conflicts. In fact she is not competent to be a leader – perhaps she has not the good basis for this role”.

SU t = NE t : so it was clear that day was the day of her death because of a terrorist attack in public.

We have a confirmation of her death from the (SU/KR)d = (MA/SA)t : the death of a leader.

The constellations show the religious terrorist imprint of the attempt, as follows :

Please look at the same constellation above on the day of her death :

See below the other alarming constellations:

MC/KR = AP = HA/VU = MA/SA = SA/PL = AR//HA+VU-SU = (UR/HA)t = PL d. = (UR+AD-MA)t : “The authoritarian Benazir is under the influence of devilish forces which hinder a positive development and lead now to a violent death in public, by a terrorist action”.

Let’s look now at the Ascendent Axis (AS = The Others). We find some negative constellations, as follows :

“Others have the political and governmental power. Her leadership must finish due to adverse circumstances. The risk of assassination falls upon her”. “Present times are ready for her assassination. High commanders of terrorism are involved, or high commanding powers which act through terrorist actions”.

We cannot deny the role of Mr. Musharraf in the constellation of the “high powers”. Actually, the Sun of Musharraf is on the AS axis of Benazir, and we must think that it was precisely him who deported her some years ago. Now his direct Sun is on her Saturn and her Uranus/Admetos. It is clear that he was her enemy, although I’m not sure that he ordered terrorists to murder her, since her AS d = (UR+AD-CU)t – terrorist association- doesn’t involve SU/SU d. of Musharraf.

Benazir’s Sun on the Aries Axis is involved in the sums of all the full factors. For ex: AS = SU+AS; MA = SU+MA; MC = SU+MC, etc. Which means that she was directly and physically involved in all the planetary symbologies as well as in a public role.

Benazir was definitely destined to be present in the public scene, but she should have had a better understanding of her destiny by staying far away from a public role, considering the risk she took, as the p.p. MO=AD=AR =SU informs us. But she was to full of herself and loved the power too much to be cautious (MC/VU = SU/KR = VE/KR).

The Uranian Invisible Planets clearly showed the way of her destiny.

During my reading of the Annual World Horoscope , at the beginning of December 2007, looking at the chart of Benazir Bhutto, I wrote in the paper of the graphic the following words :

“She cannot win. She has not the destiny to be a lasting political head of State. If she insists, she might end up badly. Does she risks her life?”

-To Liane Thomas Wade for the natal time of Benazir Bhutto mentioned in the weekly electronic journal of NCGR .

-To Francine Rasenberg who kindly corrected my English text .

-To Michael Feist who discovered the fatal constellation of the death MA = SA d, (see please the Note* in the first page) and also for the wonderful graphics.