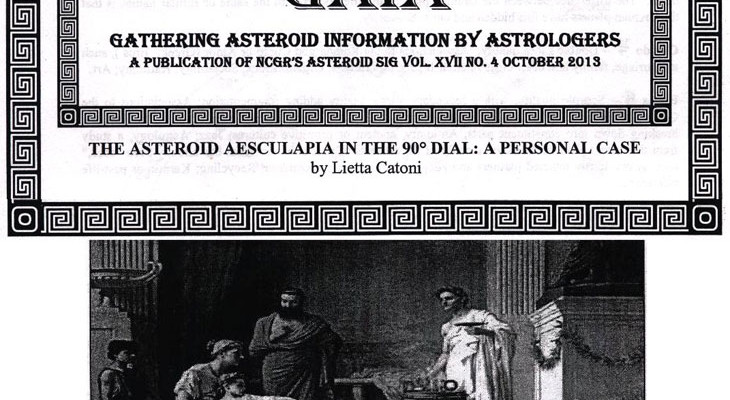 THE ASTEROID AESCULAPIA IN THE 90° DIAL: A PERSONAL CASE

The quarterly GAIA October 4, 2013, issued in the U.S., publishes an article by Lietta Catoni on the subject: The Asteroid Aesculapia in the 90° DIAL. Along with an excellent comment of the President / Editor Nona Gwynn Press-New York.

THE ASTEROID AESCULAPIA IN THE 90° DIAL: A PERSONAL CASE

Brief reference to the meanings of Aesculapia, especially in my natal chart

In ancient Rome, Aesculapia was the god of physicians, medicine and healing. Veering from the myth to astrology, Asteroid Aesculapia, named for Aesculapius, adds information about health conditions, which refines the interpretation and makes it more precise.

In this research, Aesculapia is examined both as a full factor and as a mid-point in specific reference to the axis of health Saturn / Neptune = Moon. It indicates clearly the weak state of health (confirmed in the course of an entire lifetime).

Full Factor is every single planet and personal point (included the Meridian, Ascendant, Moon’s Node, Transneptunians and Asteroids) which is positioned on the four corner points of the 90° Dial or on the 18 points of the 360° Dial. The conjunctions, squares and oppositions of the 360° chart are shown as conjunctions on the 90° Dial. It is of overriding importance in the interpretation. I also asked Nona Gwynn Press to include her list, “Uranian Planet Key Words” which gives the glyphs and meanings of the Transneptunians, or Uranian planets (see Page 2).

Graph 2 shows the most significant planetary pictures on the axis of Aesculapia. They are: MOON /MARS = MOON/ (MARS / HADES) = SUN / ZEUS = NEPTUNE / KRONOS = MC / KRONOS = NODE/ADMETOS = URANUS/PLUTO = URANUS/VULCANUS. In particular, MOON/MARS is a generator of disease because the Moon is a full factor of the health axis.

Aesculapia – medicine and physician – is related to the conditions of a serious blood disorder (MO // MA / HA), with the predisposition to disease (SU / ZE) that weakens the body’s defenses especially in the maturity of life (NE / KR). So, the planetary picture : NO/AD will be connected with the bone-marrow in the old age through a chromosome mutation (UR/PL). Although there is a physical energy to fight against the quickly phases of transformation of the energy balance (UR/VU). The ego becomes aware of all this (MC / KR). 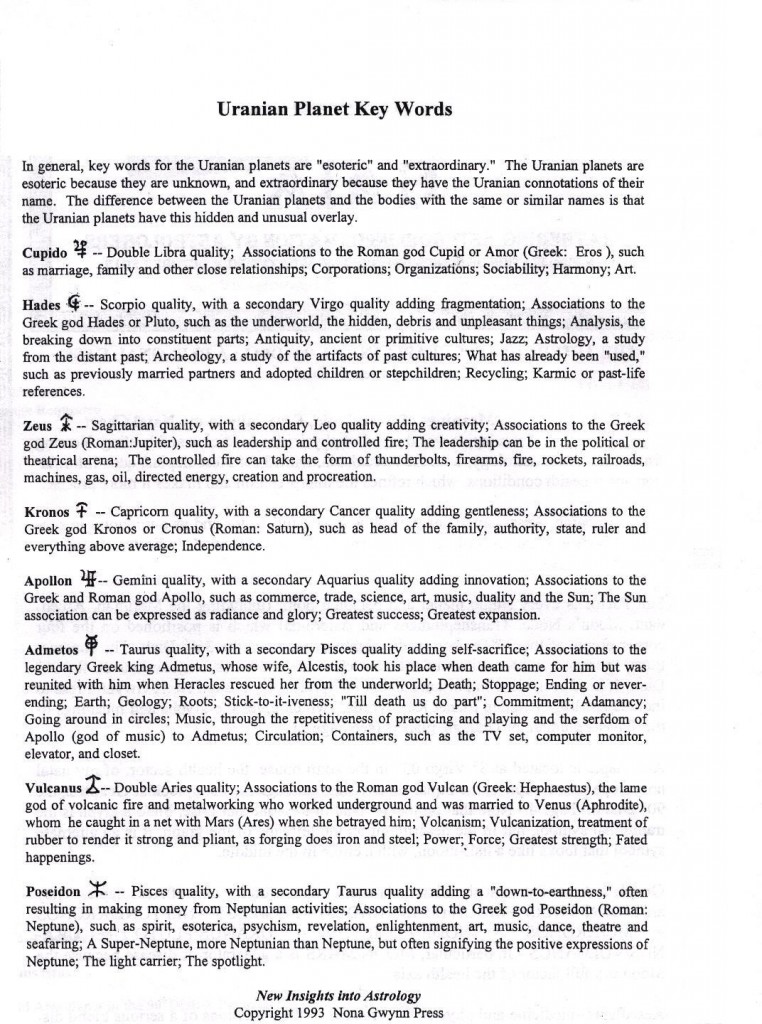 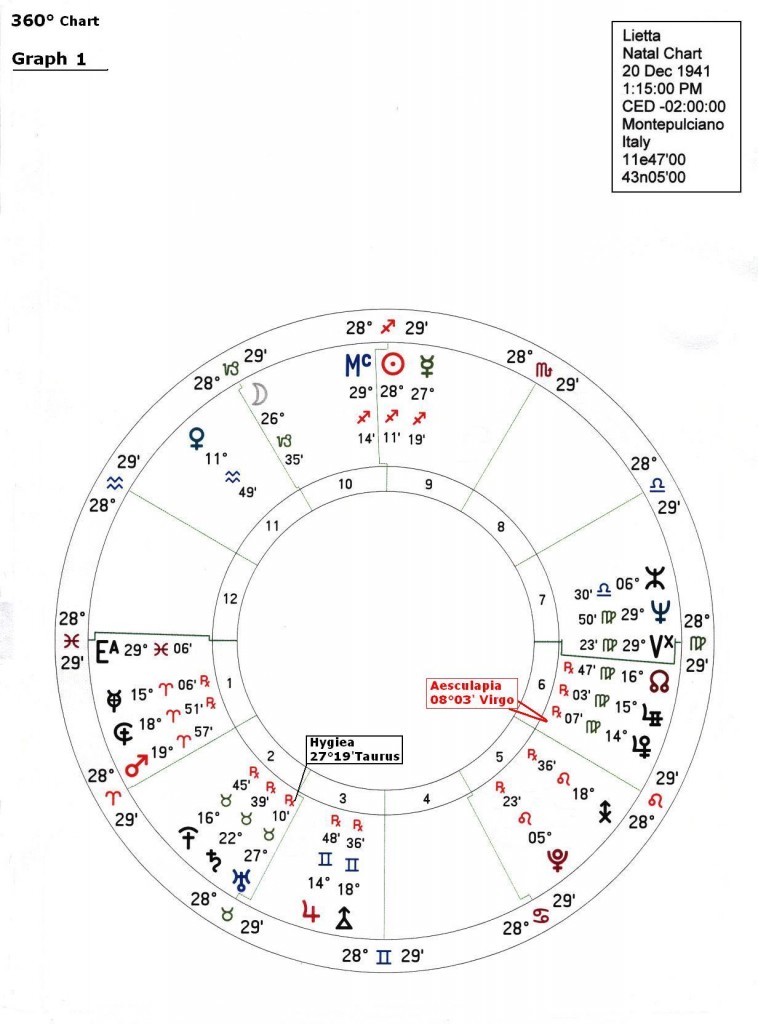 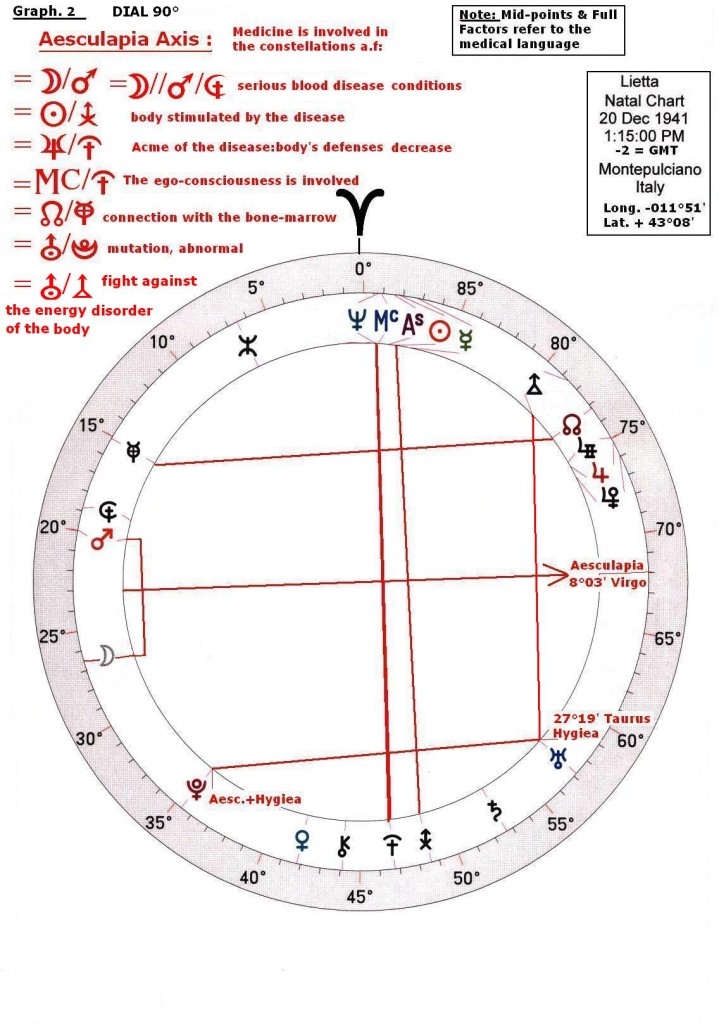 Risk factors for severe disease in my natal chart

They are mainly two: MARS / HADES and SATURN / NEPTUNE.

Mars / Hades has acted on two fronts: in childhood, with a serious intestinal disease (Typhus), and in age “saturnine” of full maturity with a serious blood disorder (Polycythemia Vera). Both meanings are typical of this planetary picture, which is very dangerous for the presence of Hadès.

In the chart of Typhus (Graph. 3), you can see that Aesculapia transit is involved with the “covering” of Hades and Mars in the Typhus disease. As follows : (HA t. = MA d.) /PL t. (The word covering is a typical Hamburg School to refer to conjunctions, squares, opposition and 22°30’ angles on the 90° Dial) 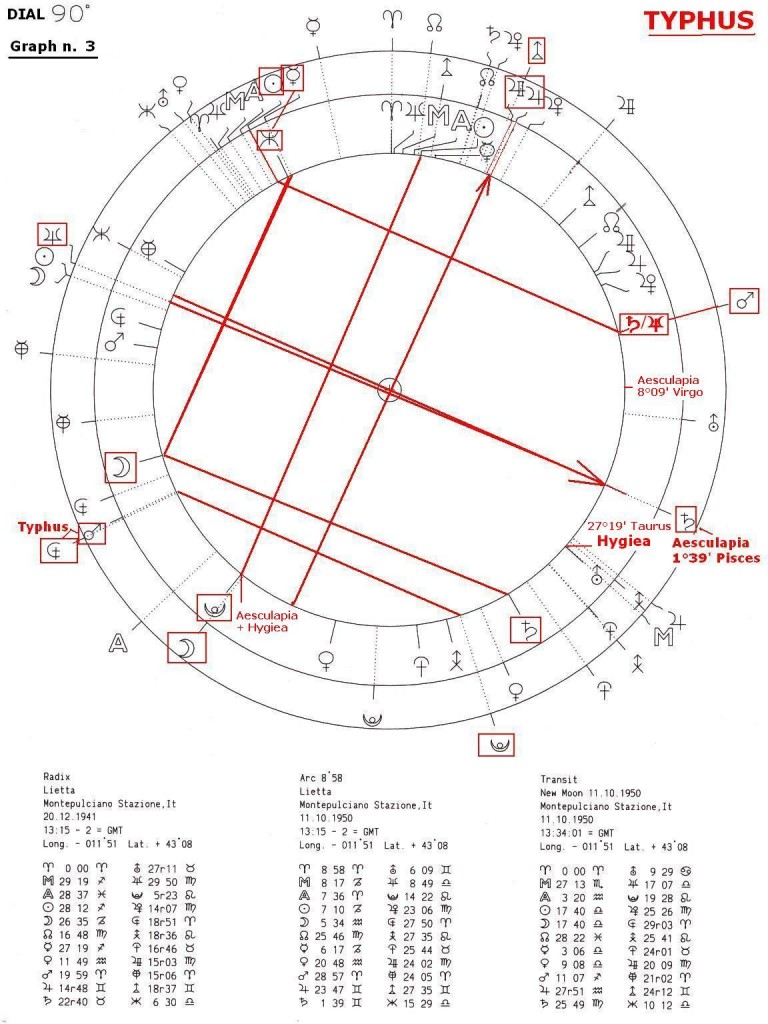 The planetary pictures on the axis of Aesculapia t. are the following:

These constellations show that the disease puts life in danger. Let’s search for any beneficial factors, as follows:

It should also be considered that if Aesculapia in transit indicates the onset of the disease, natal PLUTO is connected to Aesculapia + Hygiea (Greek goddess of health) both radix. They incline towards a possible regenerative capacity of Pluto. The disease could take a path of recovery and physical healing.

In reality, things went like this: at the time Italy didn’t have a specific Typhus antibiotic which was already on the market in the U.S.. In my hometown there was an epidemic of Typhus and some patients died. As for me, though I was struck severely (black Typhus), my body reacted by itself and when the antibiotic from the Vatican’s international pharmacy arrived to the hospital, I was already on the mend. 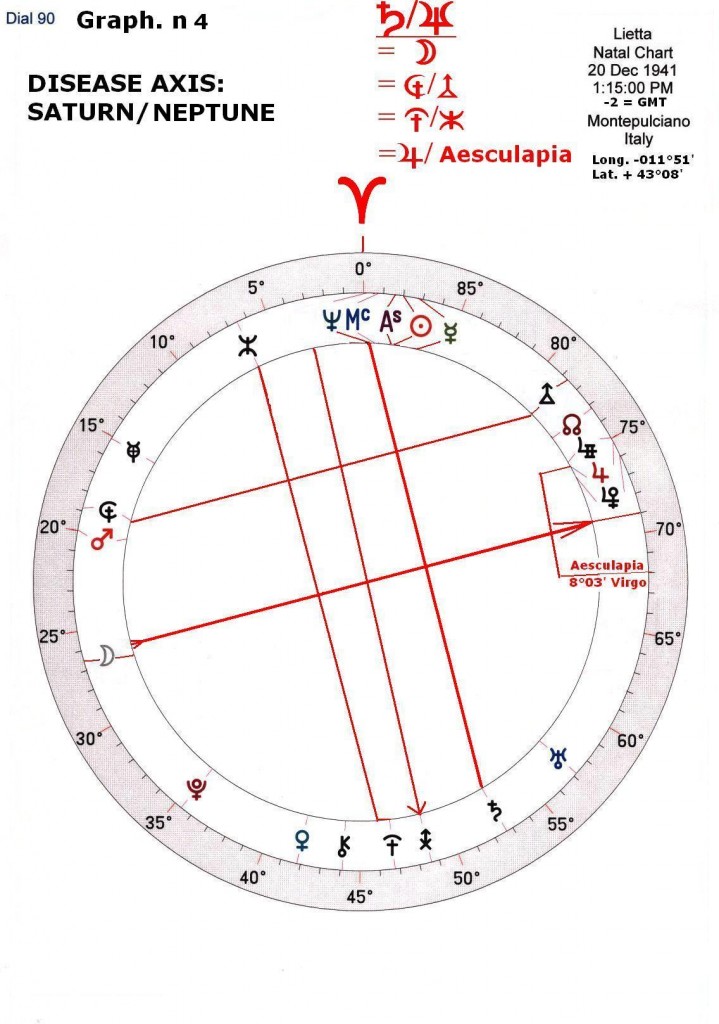 Let’s look at the full factors and mid-points (see Graph 4):

= MOON “condition of weakness in the state of health”

= KRONOS / POSEIDON “a factor of revelation (Poseidon) of the disease in aged subject (Kronos)” can be positive, but its course depends on the other factors of the axis.

= JUPITER / AESCULAPIA “can be a positive factor.”

Since HADES / VULCANUS does not allow healing, the alternative option is the “chronic” desirable with ARIES Point / SATURN = JUPITER / AESCULAPIA. Through Aesculapia, competent doctors and medicines will give favorable (Jupiter) results with regard to treatments. So it was, at least until the present time (2013)!

The course of the Blood Disease : from the first symptoms (mistaken diagnosis) to the right diagnosis

The disease (Polycythemia Vera) was diagnosed in the days of the New Moon in October 2004. It is a serious disease of the blood.

Already in the previous 6 months (about May 2004) some unusual symptoms had surfaced apparently unjustified without the doctor being able to make an accurate diagnosis.

Looking at my natal, direct and transit chart on May 11 (Moon’s Last Quarter), we note the following disturbing constellations (Graph. N 5 with the title : Illness is looming ahead): 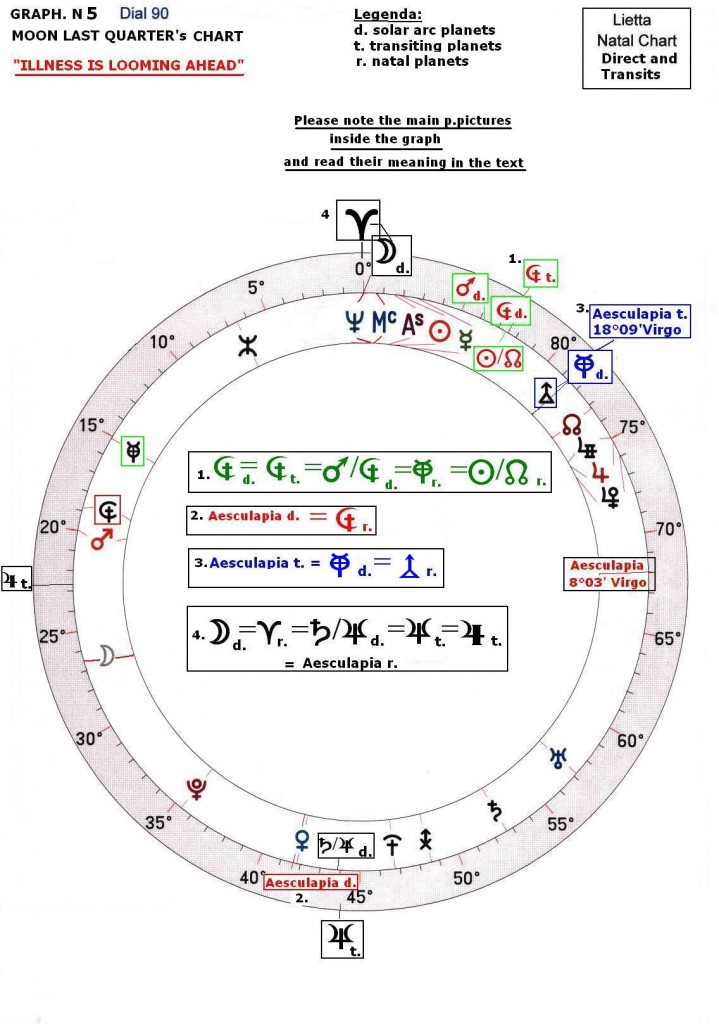 All the constellations inside the graph are :

1) HADES t. = HADES d.: a “point of no return”, being a degenerative factor. The wheel of karma comes into action.

2) AESCULAPIA d. = HADES r: the beginning of an irreversible disease 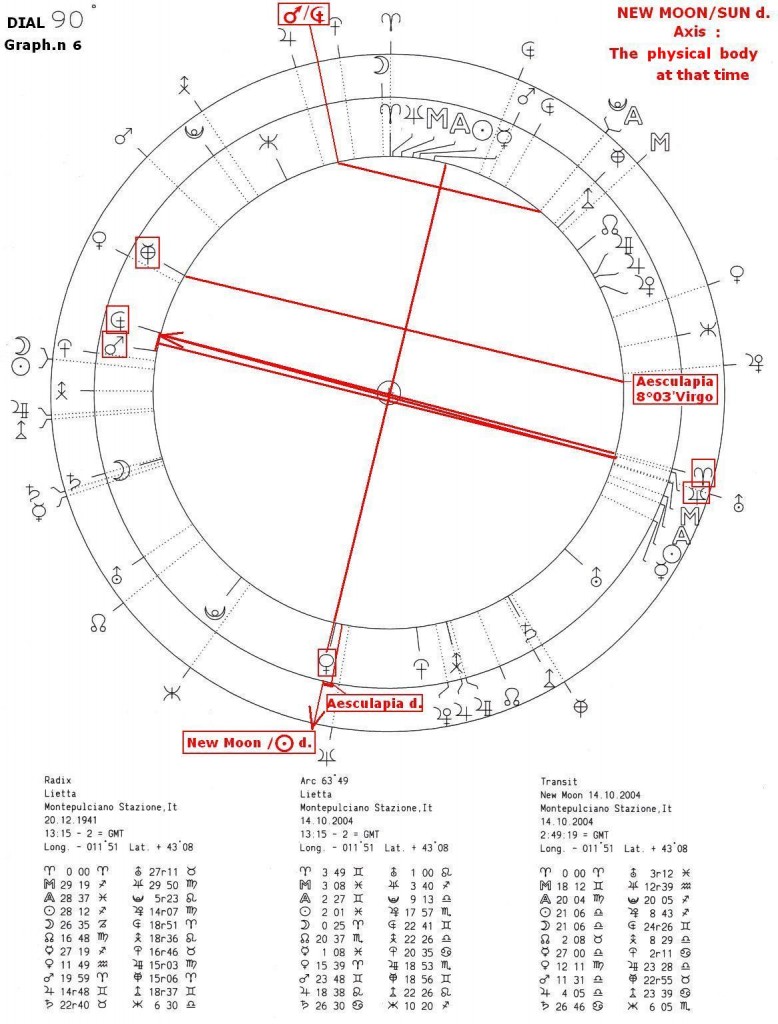 = VENUS r. : with the constellations above, a factor of disequilibrium

= AESCULAPIA d. : the asteroid declares the existence of the disease or the need for treatment

= AESCULAPIA / ADMETOS r. : confirms that the treatment is aimed at the bone marrow 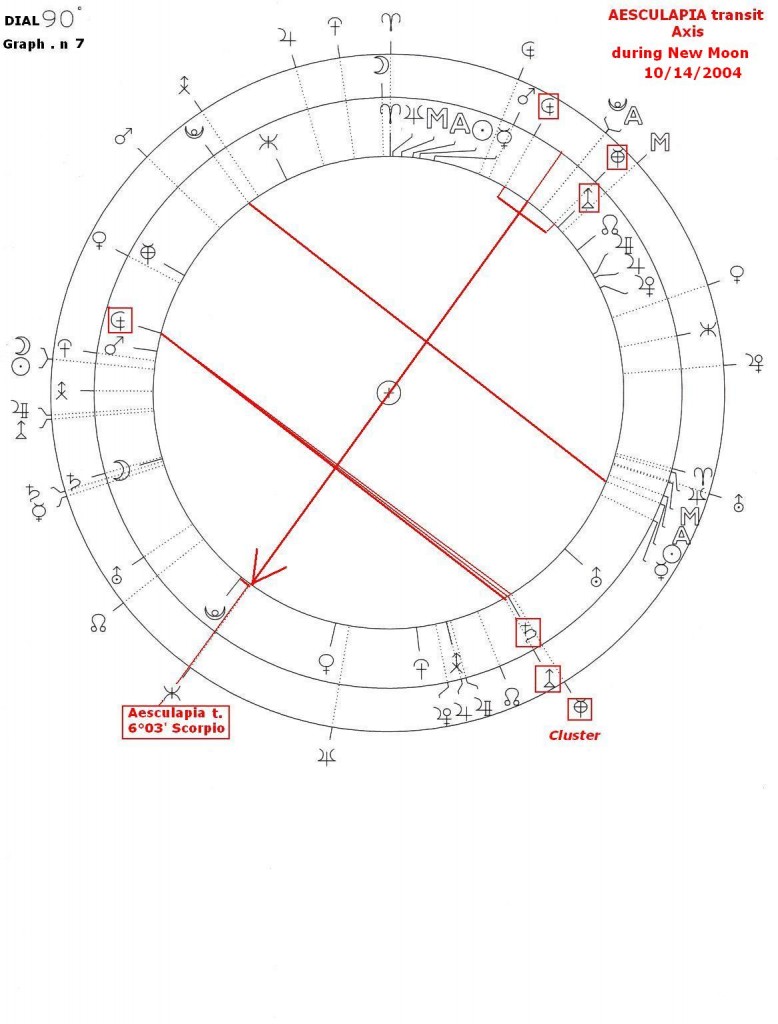 = POSEIDON t. : shows us the beginning of the disease

= SATURN / HADES r. = SATURN/VULCANUS d. = SATURN/ADMETOS t.: serious illness, can form tumors, it is the beginning of a new cycle.

Finally, the decisive confirmation is from the Axis of Health (Graph. N.8). 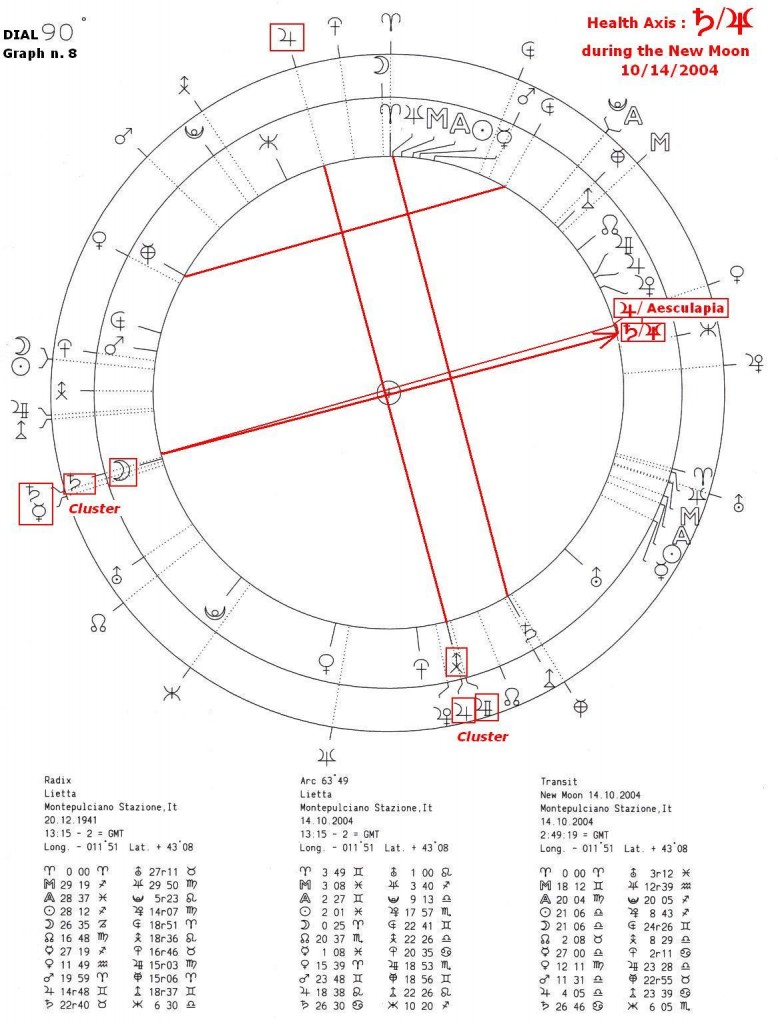 We can see that Saturn directly on the natal Moon, marks a time of change and restriction in terms of health. It ‘s a factor of disease and aging. It is a new dangerous path. In addition, if Saturn is a potential indicator of disease, both the direct Jupiter and Apollon play a role in accelerating the disease process or in attesting to its severity. At best they are a kind of protective umbrella.

As we can see, Graph 8 shows two powerful clusters in which the most dangerous constellations like HA d./AD r, HA/VU and ZE, connected with Saturn d. on the natal Moon are recurrent.

We also can see that SATURN r = VULCANUS d. = ADMETOS t. : This cluster reveals the beginning of a difficult cycle . A blow of fate.

Such a serious clinical diagnosis excludes the possibility of healing. However, the constellations in the axis SATURN / NEPTUNE, instead of being degenerative, are in a “chronic” direction. Chronicity proposes an acceptable lifestyle. The role of AESCULAPIA / JUPITER in the Health Axis has played a positive role, like a life-support of the destiny. In other words, I configure it as a guardian angel who has spread out its wings on me, at the time of the most difficult test of my life.

I have been a student of Hamburg School Astrology in the last eleven years. Writings from the prominent astrologers and researchers of the Hamburg School were my good teachers. Udo Rudolph, Chairman of the Astrological Research Society (Hamburg School), was my personal teacher for seven years. He certified me as the representative of the Hamburg School Astrology in Italy in October 2007. I also have followed the writers of the Uranian Forum, published by Penelope Publications in Plantation, Florida. My knowledge of the Uranian method doesn’t exclude traditional astrology, studied during the last twenty years. More recently, reading books by Martha Lang-Wescott and Nona Gwynn Press has inspired me to include asteroids as well.

My web-site in Italian/English is : www.uraniana.it 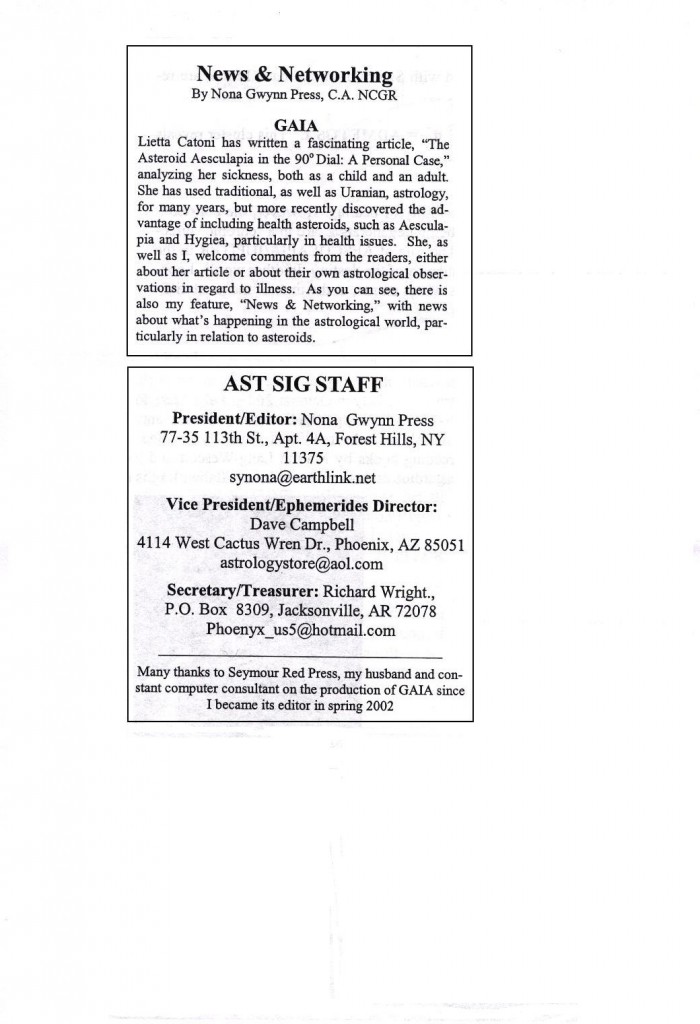