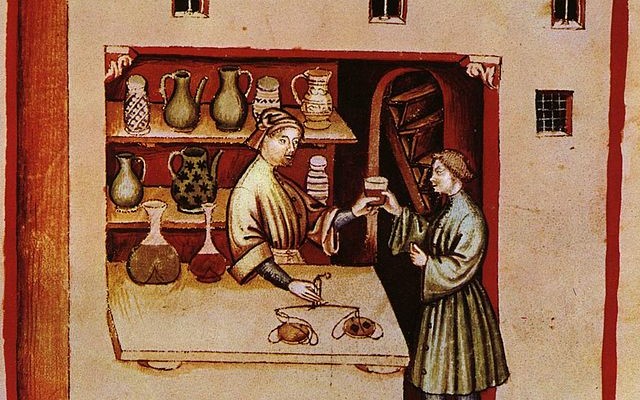 The asteroid Abbott : a key of illness

Key of interpretation in a case of disease

The following pages refer to the role of asteroid Abbott in the life of a person affected by a serious case of disease. This disease, actually of a chronic character, can degenerate into a more serious pathology (leukemia). This writing tells about the events during the successive months after the publication in GAIA of the article: “ The Asteroid Aesculapia in the Dial 90 – a personal case”. New asteroids introduced into the personal horoscope have been able to clarify “ the karmic retribution” of this disease and watch for better choices to adopt in the present time. Here I remind that it concerns Polycythemia Vera, a blood disease due to a chromosome deformation, diagnosed in 2004. Since more than 3 years the most efficient medication has proved to be the VERCITE of the ABBOTT Laboratories (England). It concerns a chemotherapeutic drug ; dangerous but necessary for life.

A new fact happened on the day 15th of April 2014, during the Full Moon and Eclipse phase. (the transits of the asteroids during lunar and eclipse phases are more active and efficient). That day the sick person underwent a hematologic control, presenting the routine tests with excellent results. But the hematologist

proposed to change the therapy, letting go off the Vercite to adopt a new medicine which – according to Internet information – has not been conceptualized to cure this specific disease.

Before deciding to assume or refuse it, it was better to give a profound glance into the horoscope (natal, solar arc direction and transit Full Moon) discovering by chance the asteroid Abbott on the natal axis of the Northern Lunar Node (houses 6/12 of health and disease, axis of the suffering). This axis contains a significant constellation: CHIRON-URANUS; this all leads to think about a disease of karmic origin.

NOTE: 1. The last planetary figure is a “Difference”. The astrologer Martha Wescott mentions it in cases of “abnormality/cellular mutation”. 2. The planet Uranus is on the axis of two asteroids Hygiea and Panacea. This one is therefore generally in contact with the “therapies” and specifically with the possibility to individualize the right cure (Hygeia), and through Panacea even to refuse the unconvincing therapies. 3. On the natal Uranus the transiting Admetos is stationed since a long time , creating a possible explosive situation. It currently concerns about an “high risk” constellation.

Let us go back to the axis: NODE=Ast.ABBOTT=(CHIRON-URANUS) and find the other main information (graphic 1):

= NEPTUNE/HADES: Abbott is a chemotherapeutic medicine

= MOON d.=SATURN/NEPTUNE d. : The disease is connected with Abbott

= MARS/HADES t.: and it is clearly a disease of the blood

= NEPTUNE+ADMETOS – HADES t.= ZEUS d.: the conditions of the health are deteriorating. Zeus is an indicator of the blood (already present in the natal chart on the axis of disease.)

= Ast.VIRCHOW / Ast. (AESCULAPIA = ASKALEPHUS) : it shows the necessity of medical cures and assistance from specialists. 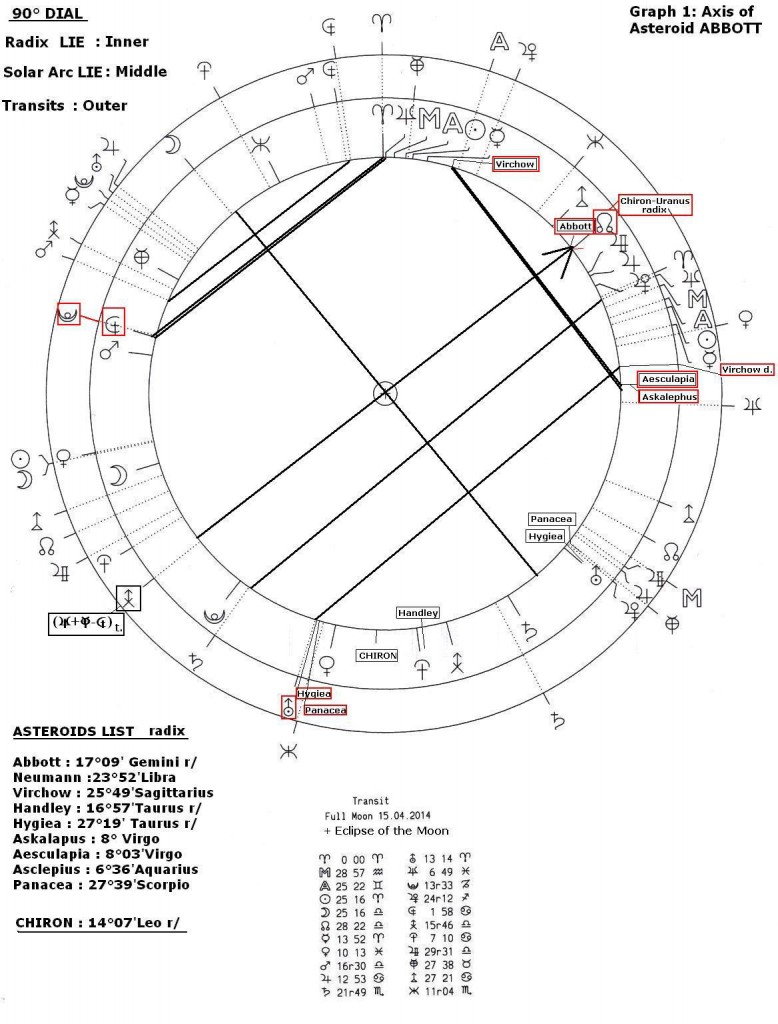 Now question: is it necessary to change the cure by eliminating Abbott, in a picture of natal, direct and transit constellations, so risky?

Let us look for an answer (Graphic 2): the transit sensitive point, HADES+PANACEA-HANDLEY (indicated by Martha Westcott in her Newsletter of May 2014) is here on the axis of HADES r.= PLUTO d.=URANUS d (= asteroids HYGEIA d.= PANACEA d.) = POSEIDON t. = Asteroid VIRCHOW r. (Handley as well as Virchow are asteroids connected with cancerous diseases). The message seems clear: ” With clarity and realism the proposed cures can be refused”. 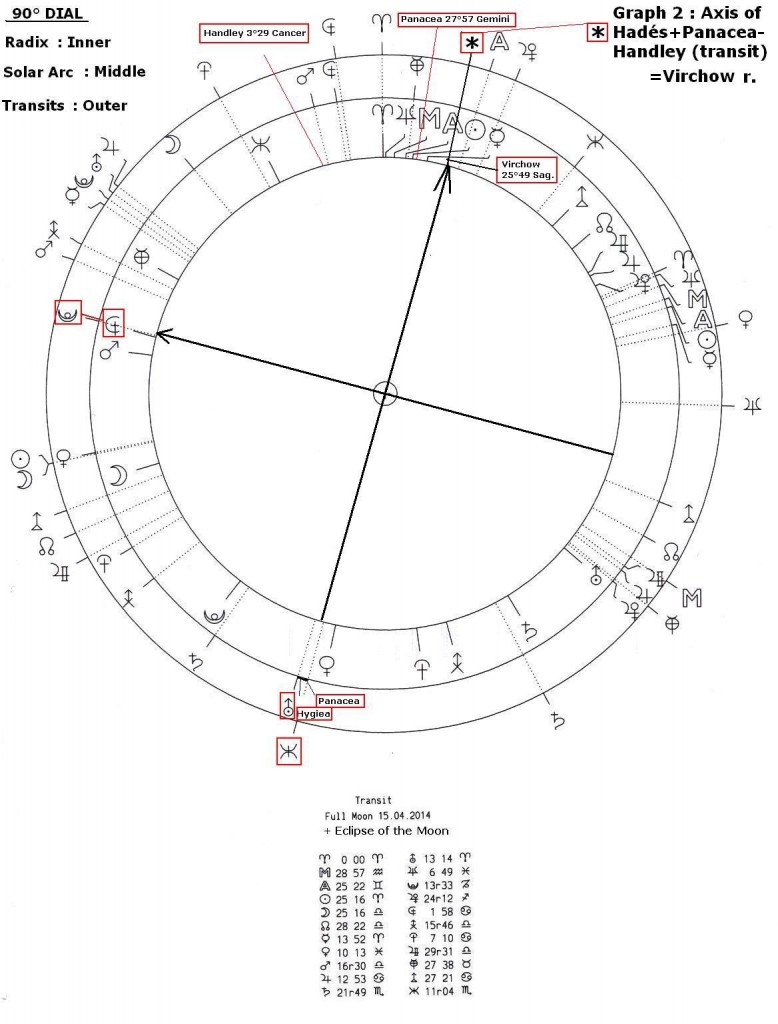 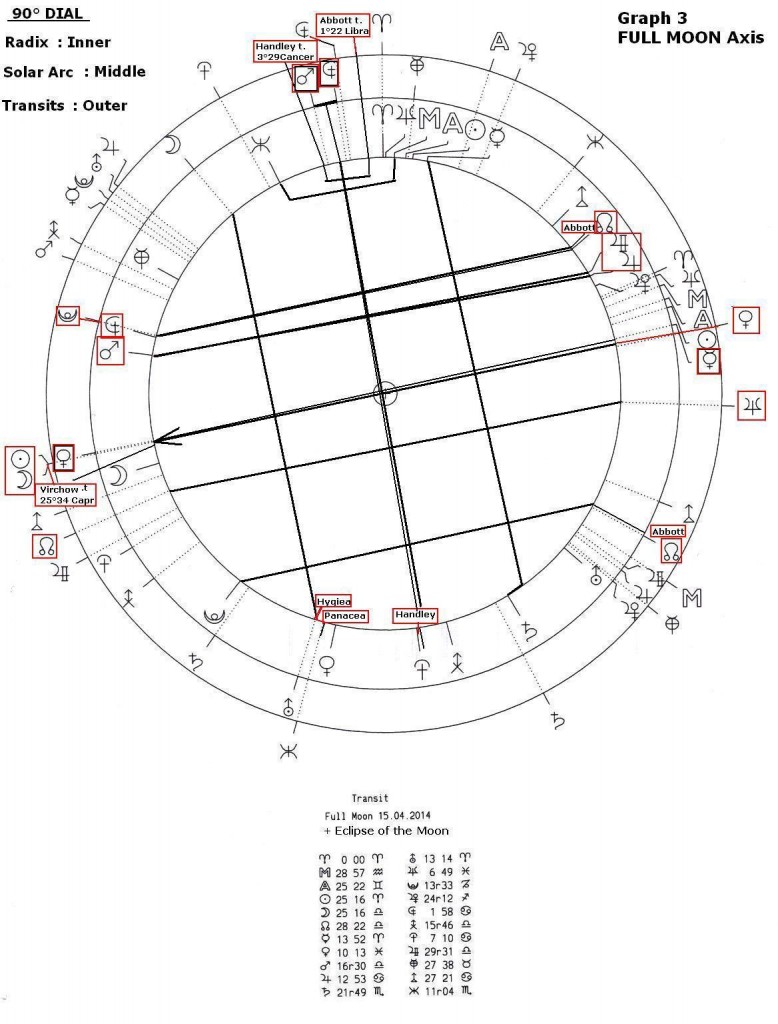 “ It is better not to comply with the conditions proposed by other (NO=NE t) specialists of serious diseases (KR=Ast. Handley) r. who propose to change the chemotherapeutic Abbott therapy (NO=ast. Abbott/PLUTO) d (Ast. Abbott/Handley t.) used in the cure (MOON/URANUS=HYGIEA=PANACEA) d. of the blood disease (MA/HA) d.

Now the balanced information on what to do are important. The personal decisions in regard (MC/POSEIDON) r. and due to a strong mental concentration (Mercury/Saturn) r. are very fortunate (Jupiter=Apollon/MARS) r. “

After having examined the constellations, the person involved has turned to a prominent hematologist for a consultation. “ Do not change Abbott” was the advice of the specialist. Furthermore, that in difficult moments someone or something interferes to help, was written in the natal axis of this hard disease (Saturn/Neptune=Hades/Vulcanus) as follows : through Jupiter/Ast.Aesculapia (the right doctor), Jupiter + Hades (a factor of protection against degeneration) and Kronos=Handley/Poseidon (the medical specialist of great competence and humanity). They all are in the axis of the illness.